After his parents divorced when he was in third grade, he moved with his mother and sister to Alpena, growing up in northern Michigan’s Diocese of Gaylord. He attended the parish grade school of St. Bernard of Clairvaux in Alpena, where his great-great grandfather was one of the founding members in the late 1800s.

After graduating from Alpena High School in 1977, Archbishop Russell spent a year as an exchange student in France, where he began to discern a calling to the priesthood. He entered St. John’s Seminary in the Archdiocese of Boston, where his father’s family lived, and was ordained a priest on June 20, 1987, at the Cathedral of the Holy Cross in Boston.

As a priest, Archbishop Russell’s first assignment was as associate pastor of Sacred Heart Parish in Lynn, Mass., where he served for five years. In 1992, he was briefly named associate pastor of St. Eulalia Parish in Winchester, Mass.; however, three days into his assignment, he was asked to become priest-secretary to Boston’s cardinal-archbishop, Cardinal Bernard Law.

In 1993, while serving as Cardinal Law’s secretary, Fr. Russell was asked to enter the diplomatic service of the Holy See, and was sent to study at the Pontifical Ecclesiastical Academy in Rome, which trains Vatican diplomats.

After graduating from the academy, as well as earning his doctorate in canon law from the Pontifical Gregorian University in Rome, he began working in the diplomatic service in 1997 under Msgr. James Harvey, who was then assessor to the Vatican’s Secretariat of State. Six months later, he received his first assignment outside of Rome in the apostolic nunciature to Ethiopia, Eritrea and Djibouti in Addis Ababa, Ethiopia, serving there until 2000.

On July 6, 2007, Pope Benedict elevated Msgr. Russell’s rank, this time to “Prelate of Honor,” the second of three ranks of monsignor.

The next year, Pope Benedict asked Msgr. Russell to take on the unique assignment of Chargé d’Affaires (head of mission) of the Vatican’s presence in Taipei, Taiwan, an important task, given the Church’s complicated relationship with China and the self-governing island. He served in that capacity for eight years, from 2008-16.

On March 19, 2016, Pope Francis announced he was naming Msgr. Russell as apostolic nuncio — the Vatican’s top ambassador — to Turkey and Turkmenistan, an assignment that carried with it his elevation to the episcopate. At the same time, the pope named him titular bishop of Novi, Montenegro.

Archbishop Russell was ordained and consecrated a bishop on June 3, 2016, by Cardinal Sean P. O’Malley at the Cathedral of the Holy Cross in Boston. Among his two co-consecrators were Archbishop Allen H. Vigneron of Detroit & Archbishop Leo Cushley of St. Andrews & Edinburgh, Scotland.

On May 23, 2022, Pope Francis appointed Archbishop Russell as the 31st auxiliary bishop of the Archdiocese of Detroit, serving under the jurisdiction of Archbishop Vigneron. He was installed to the archdiocese during a Liturgy of Welcome and Inauguration of Ministry on July 7, 2022. 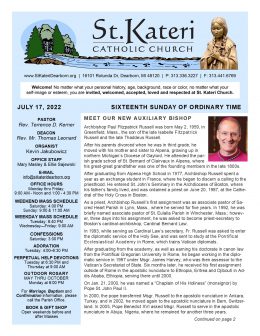