With Fr. Terry out of the office, I thought I’d get my “2 cents” worth in.  On July 29th I had just arrived in Denver, CO for a family reunion. The following day I learned that Fr. Terry had been admitted to the hospital.  As you know Father is fighting a blood infection and pneumonia.  On August 11th Fr. Terry was transferred to a “rehab” center for continued medical care.

The “front office” is in regular contact with Fr. Terry, who continues to direct parish affairs.  Feeling much better now, he is anxious to get back to St. Kateri.  He has retained his jovial personality and good humor.  I have been able to administer Holy Communion to him as has Bp. Battersby.

Fr. Terry mentioned to me that the substitute priests are very impressed with the parishioners and the parish facility, while stating (jokingly?): “We may be facing a coup d’ e-tat upon my return”.

On another note, I would like to express my gratitude to you for your support of our diaper and wipe drive on behalf of The Lennon Center, which began in mid-May through June.  Over that time, I made five deliveries; my car “filled to the brim”, which also contained some cash donations.  They were most appreciative.  I hope, with Fr. Kerner’s approval, we will do this again.

Finally, we’d like to welcome Amy Catallo, our 9am Sunday sacristan, as the new scheduler for our weekend Mass lectors.  Father and I are most grateful to Gary Lewis’ fulfillment of this role (to include the EMEs and Altar Servers) for the previous four years.  With Amy preparing a new schedule for October – January 2, if you have an interest in being a lector, please advise Dcn. Tom or the office ASAP.  Amy will pair you up with a “seasoned” lector for the first few Masses. 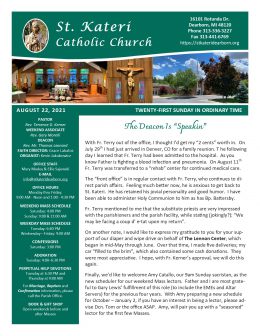