REJECT EXTREME RESPONSE TO ABORTION; VOTE NO ON PROP 3

Michigan voters are being forced into what is portrayed as an all-or nothing choice on abortion when they go into the polls on Nov. 8. Proposal 3 is not that. There is a more responsible way to settle the abortion question in Michigan.

Passage of Proposal 3 would go well beyond maintaining the status quo on reproductive rights.

The language is so loosely written that it risks creating a wide open environment on abortion that would be all-but-impossible to temper should the proposal’s implementation lead to unintended consequences.

Ballot initiatives such as this one are the worst way to make law.

With the Supreme Court’s overturning of Roe v. Wade this summer, the question of if and under what circumstances abortion should be legal has been returned rightfully to the states.

The Reproductive Freedom for All ballot initiative, if passed, would amend the state’s constitution by removing all restrictions on abortion, even the ones Michigan residents generally support, including parental notification and limits on late-term abortions that had existed here for 50 years under Roe.

Passage would place Michigan among the most permissive states in the nation with regard to abortion.

It is out of touch with Michigan values. All rights should be subject to reasonable regulation to guard against abuse and to protect the vulnerable.

The governor and Legislature must work together to produce a law that better reflects the will of the Michigan people, while putting in safeguards to both assure a woman’s right to bodily autonomy and that choices are made responsibly.

Unfortunately, both pro- and anti-abortion rights activists have gone to the extreme of the spectrum on an issue on which most people find a lot of nuance.

Many voters are concerned that allowing Michigan’s 1931 abortion regulations to stand as current law could potentially criminalize a necessary medical procedure.

That law has been stayed by the courts and won’t go into effect if Proposal 3 passes unless the court lifts the order.

That provides room for a legislative solution that works better for this state.

Michigan residents overwhelmingly support abortion exceptions in cases of rape and incest and the life of the mother.

A majority also wants abortion to remain fully legal in the first trimester. Support for second and third trimester abortions, however, drops precipitously. And 64% of Michigan voters believe the law should require girls under age 18 seeking an abortion to have the written permission of at least one parent or a legal guardian.

Proposal 3 could shred the ability to put in place those safeguards, and others.

The reasonable protections that stood for decades under Roe should provide some guidance for future legislation on this issue, along with an understanding of Michiganians’ values and preferences.

The proposed amendment to the state’s constitution enshrining abortion up to the moment of birth doesn’t meet either of those criteria. It’s an overreach that seeks to exploit a moment of panic among those who fear losing reproductive freedom.

Vote no on Proposal 3 and demand that Michigan’s political leaders come to a responsible, middle-road answer to the question of abortion in this state. 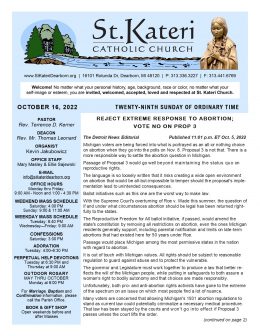