It is getting close to Election Day and I suppose most of us have an idea of how we will cast our vote. We have tried to discern where candidates stand on important issues and what type of leader they might be if elected. However, there is a good chance that when we go into a voting booth, we will cast at least one vote for a person who we never heard of and to do a job we do not understand. We know the more notable people in the more notable contests, but some of those on the ballot as we get further into it? Who knew that was going to be on there?

In life we will at times be asked to make a choice about something or someone we know little about. Our choices will not always be as informed as we would like. Then, when we do know some information needed to make a choice, we still don’t know everything. We may support a candidate and not really know him or her personally.

When God chose you and me, He had all the information needed to make the choice. The crazy thing is He chose us anyway! He knew we would sin, turn our backs on Him, and sometimes not be very good ambassadors for Him. However, He still chose us because He loves us. We are a chosen people. We are His own. I don’t know about you, but if given the chance I am not sure I would have chosen myself. I rejoice that God sees in me something that at times seems hidden to me.

Pray that the outcome of the election may be one that will protect and uphold the dignity of human life.

VOTE NO Prop. 3 Reproductive Freedom for All

If it passes, this proposal will make Michigan the most pro-abortion state in the country. 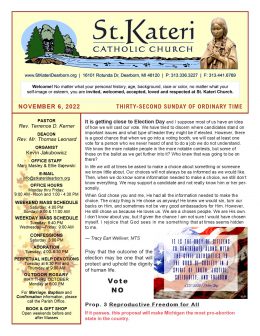