Abandoning Ourselves to God, Part I of 3

I would like to use the next three The Deacon is “Speakin” articles so speak about the topic: Abandoning Ourselves to God, based upon the thoughts of Pope Benedict XVI.  Hope you enjoy.

Back in Book of Genesis the struggle between the serpent and humanity is foretold.  However, the “offspring” of a woman would triumph and crush the head of the serpent to death; it was foretold that the offspring of the woman – and through him the mother herself – would be victorious and that through this offspring, God, Himself, would triumph.

As biblical history unfolds, the human being does not trust God.  Tempted by the serpent, he harbors the suspicion that, in the end, God takes something away from his life, that God is a rival who curtails our freedom and that we will be fully human only when we have cast him aside.  In brief, only in this way can we fully achieve our freedom.

The human being lives in the suspicion that God’s love creates a dependence and that he must rid himself of this dependency if he is to fully be himself.  Man does not want to receive his existence and the fullness of his life from God.  He himself wants to obtain from the “tree of knowledge” the power to shape the world, to make himself a god, raising himself to God’s level, and to overcome death and darkness with his own efforts.

He does not want to rely on love that to him seems untrustworthy; he relies solely on his own knowledge since it confers power upon him.  Rather than on love, he sets his sights on power, with which he desires to take his own life autonomously in hand.  And, in doing so, he trusts in deceit rather than in truth and thereby sinks with his life into emptiness, into death.

In the next episode of The Deacon is “Speakin” we will discuss why love is not dependence but a gift that makes us live, and why following the Commandments do not make us boring but make us the image of God.  In our third article we discuss “Abandoning Ourselves to God.”. 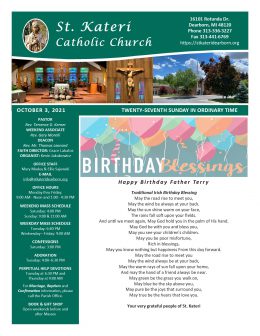